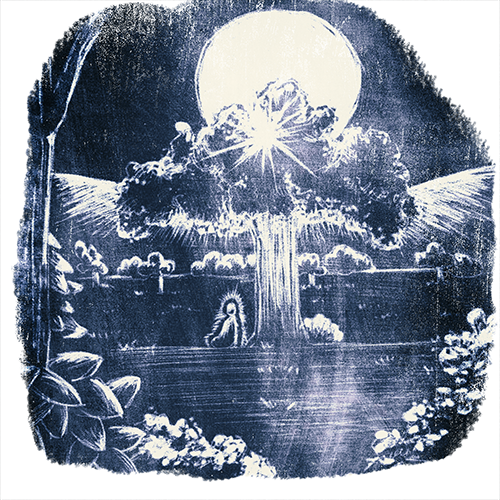 Long ago, times were different but the quests of man proved timeless. In every ancient civilization or distant village there was sure to emerge at some point a wise old man.

Once in a remote land, emerged a wise old man. He was discovered sitting under a great big tree outside the bounds of a village. Nobody knew him, yet his ability to offer meaningful, personal messages to any seeker was unparalleled. In fact, word of this wise old man spread like wildfire and before long, groups of pilgrims showed up in the nearby village asking to be led to his whereabouts. Every day, as if by some unspoken agreement, the old man could be found sitting under the same great big tree–silent, yet ready to impart wisdom.

Even though the wise old man would only give out one message per pilgrim, that did not stop a great line from forming, as people could not help but feel a deep curiosity and wonder for this venerable sage.

I was such a man. Upon first hearing word of this mysterious wise man, I had quickly made preparations to set off on what was surely to be a great pilgrimage. After all, I had burning questions that just could not wait.

After arriving in the village, I had spent the next three days in line, trying to get a good glimpse of the old man as he met with each pilgrim. Each meeting would begin in the same fashion. A seeker would approach the wise man who would gesture for him to take a seat in front of him. Then, the old man’s lips would move briefly, followed by a long pause. Sometimes the pause was only a minute; other times it could last 10 minutes. Or in one man’s case, it had taken nearly one hour before the old man spoke again. What had the old man said before the pause? This was a burning question that each one of us pilgrims would soon learn the answer to.

After receiving the wisdom, some would leave solemnly. “Now it all makes sense,” they would say. Some would leave in tears, “That’s all I’ve ever wanted to hear.” And some would approach the line of waiting pilgrims saying, “He truly is the wisest old man!”

How will I leave? What will I say? I wondered. Slowly, the line moved forward.

Finally, it was my turn. With great anticipation I approached the old man who gestured with his hand for me to sit. Now, I would hear the words before the pause! I thought to myself. Every part of my body felt on high alert. Whatever words were to come, I’d take them in fully and well.

“Match the stillness of this tree,” said the old man.

The old man had already closed his eyes. And so I sat bewildered for a moment before closing my eyes, too. I struggled to swallow as a ball of confusion in my throat could not be released.

The stillness of this tree.. match it. How, though? He’s not going to tell me, is he? At first I could not control the scattering of my own thoughts. New ones appeared with the momentum that the previous ones had created. Eventually, I came to the realization that every person who had sat here before me must have been able to cope with the same mysterious instruction, and so I decided to give it a try.

With eyes closed, I began to watch myself go into a deeper inward state. My swirling thoughts remained, but became more distant as if they were children taking their noisy play, further and further away. Soon I was not paying attention at all to the noise of the children, but reaching towards the stillness of the tree in hopes of matching it.

As I sat very still, I began to notice something. It was like a vague presence or a sensing. What is this sense? And just as if I’d spoken the wondering aloud, a reply came.

Sit in this stillness, and you will get all your answers.

No sooner had I received this piece of guidance, then the wise old man bid me farewell. My eyes popped open to see his hand already gesturing for the next pilgrim to be guided forward. Awkwardly, I thanked him and stumbled away, confused.

I felt many eyes on me as I walked past the remaining line of pilgrims, but I was too confused and in a daze to care how they saw me. As I made my way back to the nearby village, a sinking feeling of disappointment grew from my confusion. Had the old man gotten tired during my visit? Is that why he spoke only one sentence? The more I questioned what had happened back there under the shade of that large tree, the deeper I sank into disappointment. Nothing could erase the fact that I had come all this way looking for answers, and I hadn’t gotten any.

The trek back to my own village was a slow and solemn one. My will to seek answers to my questions had suffered from this pilgrimage, and it was with a heavy heart–as if something had died in me– that I approached the familiar place I called home.

I painted a smile on my face as I was greeted by neighbors and friends. Their children pulled at my sleeves to see what gifts I’d brought back. I promised them all the juiciest story about meeting the wisest old man under a great big tree that evening. Seeing their eyes light up in anticipation, my heart began to accept that it had come home again and that all could resume as normal.

Several days passed, and it was on my walk back from collecting kindle wood that I stumbled upon a little girl from the village no more than 8 years old sitting in the shade of a tree. I paused to watch what she was doing, and soon realized that she was sitting completely still. My heart began to move and thump as if trying to speak to me through my chest. A million things became clear to me as it did. A man could walk for days to meet the wisest old man, and come back empty-handed. Yet, a little girl could listen to a story and explore its wisdom by trying to taste it herself.

Overcome with curiosity, I decided to go and ask the little girl if she had gotten any answers.

When I hear the phrase, “information age” I think of turning to the internet for answers. The power that comes with a simple click of a button connecting us to our answers is beyond seductive. However, trouble arises when we rely less and less on our own direct connection to wisdom and life experience and replace it with the belief that something outside of ourselves has our answers. When this delicate balance of looking outward and looking inward is upset, we can unintentionally give our power away to whoever or whatever we view as the “authority.” In doing so, we can also begin the practice of invalidating ourselves by not turning inward and building trust in ourselves. If this continues, we can lose touch with our own power before it has had a chance to really blossom.

When this story came through, I immediately identified with the seeker–the man who went out of his way to meet the wise old man in a distant land. Then, as the story unfolded, I took a step back and observed more quietly in the background. Was the wise old man really wise? Or was he wise only when he matched the stillness of the tree? And when the seeker heard the reply to sit in stillness to get all his answers, had that reply come from the wise old man, or the seeker’s own connection to wisdom? At first I wanted to know, but then I saw the wisdom in not saying either way.

I remember being a little girl and being less conditioned by society as well as still very ignorant to the goings-on of the world. I think I would have loved to hear this story back then. When we are so young and innocent, our connection to Nature is naturally so much stronger. We can listen to a story like this and not for a moment think that wisdom is only for some people depending on their age and or gender. In fact, this story is not a tale about a wise man at all; but a simple demonstration of the wisdom that can be found when we commune with Nature.

My wish today is that, especially during this time of year, the child in each of us can look at this simple act of matching the stillness of a tree and just know there are gifts–perhaps meaningful personal messages for us–waiting in the light for us..

..that just like wisdom, gifts don’t always have to be found outside of ourselves.

No matter who or where a story comes from, moments of movement and moments of stillness can be found embedded within it. This precious balance can be seen in any form of wisdom and it is the fundamental key in the ancient human quest for answers. Even the relationship between the state of questioning and the state of having answers can be simplified into this duality of movement and stillness.

When we sit simmering in our questions, there is great movement within. In matching the stillness of a tree, these questions stop simmering and eventually can become still. In the simple absence of questions, or absence of mental activity we experience while questioning, it is akin to having the answers. We allow ourselves to experience a deeper stillness. Rather than looking for the answers to your questions, what happens when we allow ourselves to stop asking questions? When we practice the stillness that we assume comes after we get our answers?